You Are Here: Home » Free Downloads and Questions » GK and Pot Luck 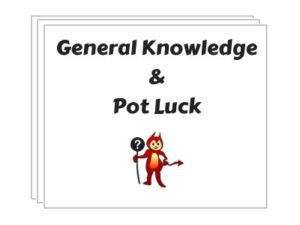 Different types of Quiz Rounds – such as the feature, letter-link and quiz-link rounds you will find on this site – are a great addition to any quiz, but most quizzes will still rely on a good range of General Knowledge and Pot Luck Rounds which you will find in each of these packs.
This page has a full sample round plus three questions from each of the GK and Pot Luck packs available

01. How many letters are contained in the word Supercalifragilisticexpialidocious?
34
02. Which sport has an organization that could be associated with the Roman numerals for 1200?
Cricket (MCC)
03. In the human body an excess of uric acid causes which painful medical complaint?
Gout
04. Which classic TV series featured a disheveled old eleventh century wizard, who accidentally travelled back through time to the late 1960’s and befriended a young boy nicknamed Carrot?
Catweazle
05. Which animal features on UK road signs to warn drivers that they might encounter wild animals?
A Deer
06. In England what is the name of the organization responsible for foreign intelligence and security?
MI6
07. In horse racing, which Grand National winner was named after Alistair, David, Nicola and Timothy, who were the grand children of his breeder, Tommy Barron?
Aldanti (1981)
08. In the game of poker, what is the lowest possible hand you could hold?
2,3,4,5,7 (6 would make a straight)
09. What sexually transmitted disease was reputedly called the French Disease by the English and the English Disease by the French?
Syphilis
10. If the words of the numbers one to ten were put into alphabetical order, which ones come first, second and third?
Eight, Five, Four

01. What are the names of the three characters on a box of Kellogg’s Rice Krispies?
Snap, Crackle and Pop
02. Apart from lettuce, which other vegetable would you use to make a Waldorf salad?
Celery
03. Which fictional superhero comes from the planet Ultron?
Thermoman

01. In chess, which is the only piece which must remain on its own coloured square?
Bishop
02. Which famous sportsperson is mentioned in the lyrics of the Simon and Garfunkel song ‘Mrs Robinson’?
Joe DiMaggio
03. In the title of a Shakespeare play, how are Mrs. Ford and Mrs. Page otherwise known?
The Merry Wives Of Windsor

01. Popularized by the Japanese, which classic Portuguese dish consists of seafood or vegetables that have been battered and deep fried?
Tempura
02. In TV advertising, which product would you associate with the phrase ‘giving you the joy of movement’?
Voltarol
03. The sixth letter of the Greek alphabet forms part of the name of which actress?
Catherine Zeta Jones

01. Where is Margaret Thatcher Day celebrated on 10th January each year?
Falklands
02. In 2009 the Abbey, Alliance and Leicester and Bradford and Bingley Building Society were re-branded and became known by which name?
Santander
03. Not including aces or court (face) cards, what is the total value of the numeric
cards of all suits in a standard deck of playing cards?
216 ((2+3+4+5+6+7+8+9+10)x4)

01. In the classic version of Trivial Pursuit, what colour represented the Arts & Literature questions?
Brown
02. Which TV presenter delivered classic put-downs such as ‘Who is the least likely candidate for human cloning’, ‘If brains were taxed, who’d get a refund’ and ‘Who would Lassie not even bother to save’?
Anne Robinson (Weakest Link)
03. During the 20th century which surname was shared by a British Prime Minister and an American President?
Wilson (Harold and Woodrow)

01. Which Mediterranean Island has two official languages, Turkish and Greek?
Cyprus
02. In the sport of archery, what is the official colour of the outer ring?
White
03. Which TV sleuth lives in the fictional coastal town of Cabot Cove?
Jessica Fletcher

01. Which brand of beer features a five pointed red star in its logo?
Heineken
02. Princess Diana of Themyscira is the alter ego of which super-heroine?
Wonder Woman
03. In rugby, what name is given to a forward on either end of the front row of a scrum?
Prop

01. In 1982, who became the first reigning Pope to visit the UK?
John Paul II
02. When Dalmatian dogs are first born, what is their colour?
White (The spots come later)
03. With a catchphrase of ‘I hate that duck’, Cuddles the Monkey was a puppet character of which ventriloquist?
Keith Harris

01. How many edges does a cube have?
Twelve
02. What item does the Gideon International organization famously give out free to hotels?
The Bible
03. In an alphabetical list, which of Disney’s seven dwarfs would come last?
Sneezy