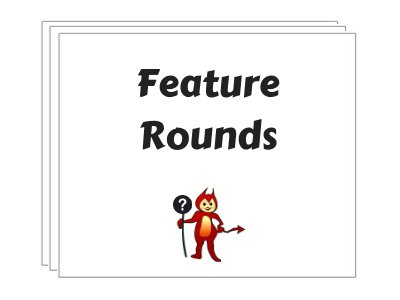 Round 01. It’s A Man Thing
Ten questions where each answer contains the word ‘Man’
Round 02. Four Letter Words
All ten questions in this round have a one-word, four letter answer
Round 03. Multiple Choice
Ten questions, each with three possible answers
Round 04. Double Initials
Five questions where all have two-word answers, both beginning with the letter ‘G’
Round 05. Numbers
Five questions, each is – or contains, a number
Round 06. All At ‘C’
Each of the five questions in this round have a one-word answer beginning with the letter ‘C
Round 07. Mystery Year
Five questions about events from the same year, with the option to offer a bonus point for naming the year

Sample Questions:
These are three questions taken from the ‘It’s A Man Thing’ round, where each answer contains the word ‘man’;

01. Nicknamed ‘Pete Marsh’, what other name was given to a preserved body discovered in a peat bog near Wilmslow, Cheshire in 1984?
Lindow Man (Officially Lindow II)
02. First appearing in 1989, what was the original title of the Daily Mirrors long-running comic strip featuring the ‘Wild West’s most gormless cowboy’?
A Man Called Horace
03. Written in just 15 minutes, which hit for Tammy Wynette is one of the best-selling singles in the history of country music?
Stand By Your Man